"MIRRORCLE" is a new type of X-ray source with the characteristics of both large synchrotron radiation and X-ray tube. 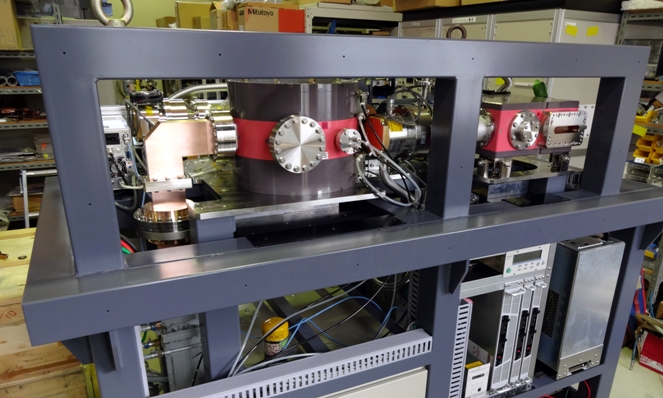 We delivered a high-power MIRRORCLE-CV4L model to Hitachi, Ltd.

It is similar to an X-ray tube in that it has a wide radiation angle.

It is a “miracle” in the sense that this product achieves the world’s smallest point light source with a full width at half maximum (FWHM) of 4 μm. 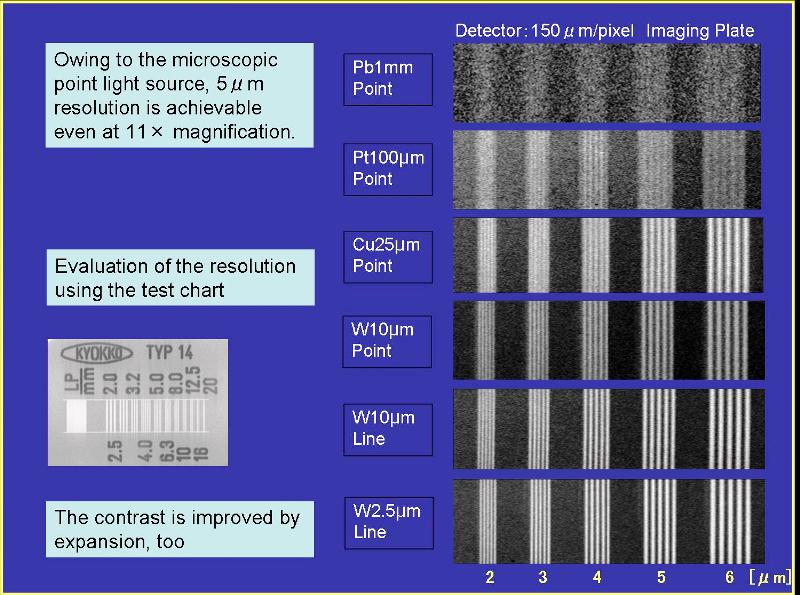 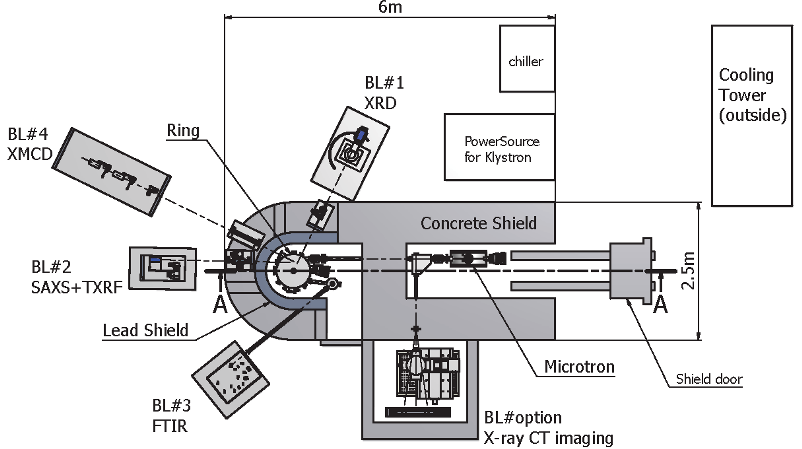 It is easy to setup in a factory or a laboratory.

It includes automated system operations. No special skills are required for turning the beam on or off.  Equipment maintenance only takes short periods of time; therefore, it can be operated throughout the year with ease.

The device can penetrate and capture images of various samples including living bodies, concrete, and heavy metals. The energy level can also be selected by using different targets.

The resolution produced by MIRRORCLE is determined by the size of the target inserted in the electron path.  A sufficient amount of X-rays, even for small targets of the order of microns, can be obtained.

XAFS spectroscopy of energy resolution 5,000 using a 3m beam line can be performed.

Images of materials with small density differences can be obtained with clear contrast at the boundaries using magnified imaging. Additionally, large samples can be imaged.

The mirror placed around the electron orbit allows for the light emitted from the region around the circumference to be collected and focused. 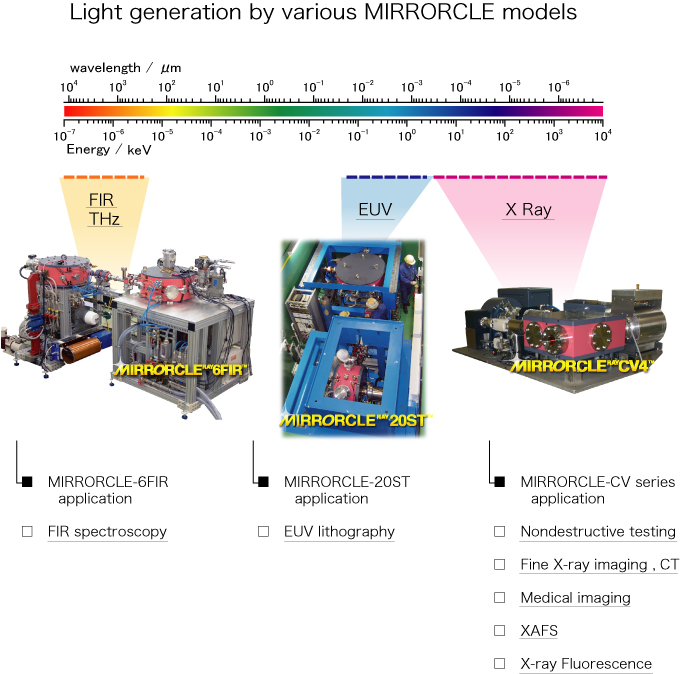 MIRRORCLE is composed of a microtron electron accelerator and an electron storage ring.
The microtron generates electrons and accelerates them to a set energy level. The diagram below shows MIRRORCLE-6X, which accelerates electrons to 6 MeV. Accelerated electrons are injected into the storage ring and progressively accumulate. By placing a target in the path of the electron orbiting around the ring, X-rays are generated via the bremsstrahlung process. By selecting a different target material, EUV emission occurs based on the principle of transition radiation.
In case there is no target, a normal synchrotron radiation will be then emitted. In the 6 MeV model, this corresponds to far-infrared (FIR) radiation. 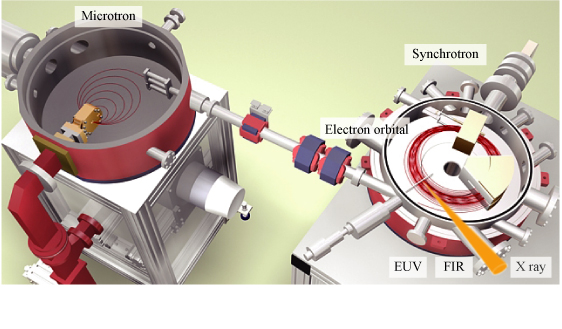 An electron gun is positioned inside the radio-frequency (RF) acceleration cavity; the electrons generated from the electron gun are accelerated in the RF cavity via a high-frequency electric field.
The high-frequency power required for the acceleration is generated from an extremely compact, but high-output, pulsed klystron. As the electrons revolve around the uniform magnetic field within the microtron, accelerating each time they pass through the RF cavity, their orbit becomes gradually larger. Once the electrons reach a set energy level (corresponding to the maximum orbit), they are extracted through the exit port and enter the storage ring. Although the principle is not revolutionary, uniform-energy and a well-phased electron beam cannot be obtained by using linear accelerators.

To achieve the most compact size in the world, a proprietary technology developed by us is used in the electron storage ring. To create a magnetic field around the entire circumference of the electron orbit, a pair of weakly converging conventional electromagnets are used. This results in a perfectly circular electron orbit.

The beam lifespan in MIRRORCLE may be considered short compared with that of traditional synchrotrons, in which beams typically have a lifespan ranging from a few hours to a few days. However, MIRRORCLE operates at the top-up mode of 1kHz, which helps achieve an average current of 1A. 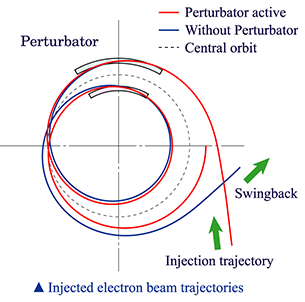 Thermography was used to observe the electron beam profile. Refer to the video file below. 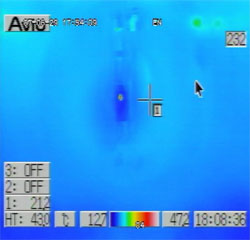 The electron beam is broad at the beginning, when only the perturbator is applied, and the accelerator is still inactive. Then, 15 ms after turning on the RF voltage, the electron beams can be observed to converge, owing to the radiation damping. As it can be seen from the injection, the beam shape is extremely stable. The actual beam profile is a few millimeters wide.

MIRRORCLE produces high-brilliance X-rays by positioning a micrometer size target in the electron orbit. The resulting collisions generate bremsstrahlung X-rays. The electrons penetrating the target can continue to circulate in the ring and further collide with the target, resulting in a very high energy conversion rate. Furthermore, the X-rays produced by MIRRORCLE have a smaller source size than those produced by a synchrotron.

Synchrotron radiation produces X-rays by bending the electron path using a magnetic field (refer to the diagram below illustrating the structure of X-ray emission in a synchrotron). According to the relativity theory, the radiation is in the forward direction. However, to generate hard X-rays, nearly 8 GeV of electron energy is required, making conventional synchrotron devices quite massive in dimension.

Hard X-rays can be produced using linear accelerators as well. In this case, however, the brilliance will be reduced because of the multiple scattering and larger source size.

The X-ray tube is a source of X-rays that can be used relatively easily in an experiment, but has the following limitations compared to MIRRORCLE:

A new infrared generator called "PhSR" (Photon Storage Ring) has been constructed. This is a new radiation device that can collect and accumulate light from the entire perimeter using a barrel-shaped mirror that surrounds concentrically the electron orbit. The light radiated over the entire perimeter of the electron orbit is reflected off the mirror and revolves around while continuously and mutually interacting with the orbiting electrons, amplifying the FIR. This is a so-called “free electron laser.” As a result, the FIR radiation emitted from the exit slit in the mirror is monochrome, while the power is increased by several orders of magnitude.

Currently, we feel that a wide-range FIR light without laser oscillation provides superior performances in absorption spectroscopy; we are undertaking various analyses by using light that is only condensed, but not lased. This is suited for analysis of water and proteins.

A key characteristic of the PhSR is the reflection of collected radiation back into the orbiting electrons. This configuration, under certain circumstances, induces lasing and significantly boosts the FIR output by several orders of magnitude. 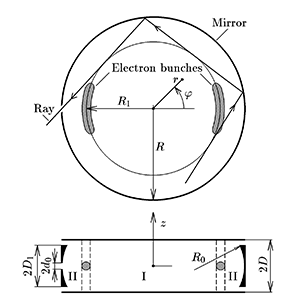